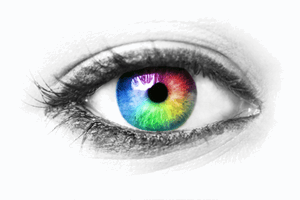 Virtual reality in gaming is coming soon: the Oculus Rift headset will finally be available to the general public next year. As it became clear that it really was a viable product and not just a pie in the sky, companies and individuals could imagine the potential of seeing in stereo with this sort of device.

One such individual is James Blaha, the co-founder and CEO of Vivid Vision. He suffered from both amblyopia – commonly known as lazy eye – and strabismus, where the eye turns inwards. He considered possible treatments, such as transmitting separate images to each eye using two projectors to strengthen the weaker one. When Oculus Rift became available, he realised that it was the technology he needed.

Experimenting on his own vision, he and co-founder Manish Gupta developed a game called ‘Diplopia’ which uses the Oculus Rift system to project different images to each eye. Since a hugely successful Indiegogo campaign in 2013, they have included motion detection using Leap Motion to make it more interactive. Using his software, Blaha gained 80% stereo vision and now has almost 20/20 vision when wearing his glasses. A small Slovakian trial also saw improvement in 9 out of 15 participants.

Vivid works by using a virtual reality device that goes on your head, which is similar to a pair of glasses. We are able to control what the left and right eye sees. [If] the left eye has a turn, we would be able to cast the image so it displays at your deviation. As you get better, the deviation will decrease until your eyes are essentially straight … So once we have all this calibrated, you will then play a game. Let’s pretend it’s tennis. Both eyes will see the arena and the net. The good eye will see the tennis racquet while the lazy eye will see the ball. This encourages the brain to use both eyes together, otherwise you will not see the ball!

This software may see an end to embarrassing eye patch therapy, where the stronger eye is covered or fogged over with a special lense to force the weaker one to adapt. Playing games using gestures will also be much more fun than traditional vision therapy, where compliance is an issue. The most important breakthrough though is the possibility to treat older patients with lazy eye – over the age of eight, the chance of successful treatment drops. Blaha reports that improvements have been seen in Vivid Vision users in their 50’s and 60’s. Even better, once vision has improved the software may not need to be used at all. “In my experience you don’t need to keep using the software to keep it up,” Blaha informed a participant of their Reddit Ask Me Anything session in June. “It is kind of like an atrophied muscle, once it is strong enough for daily use that should be enough.”

There are plans to expand Vivid Vision services to the UK, and several eye clinics have expressed interest in the system. The Vivid Vision software will be available when Oculus Rift is – currently slated as the first quarter of 2016.